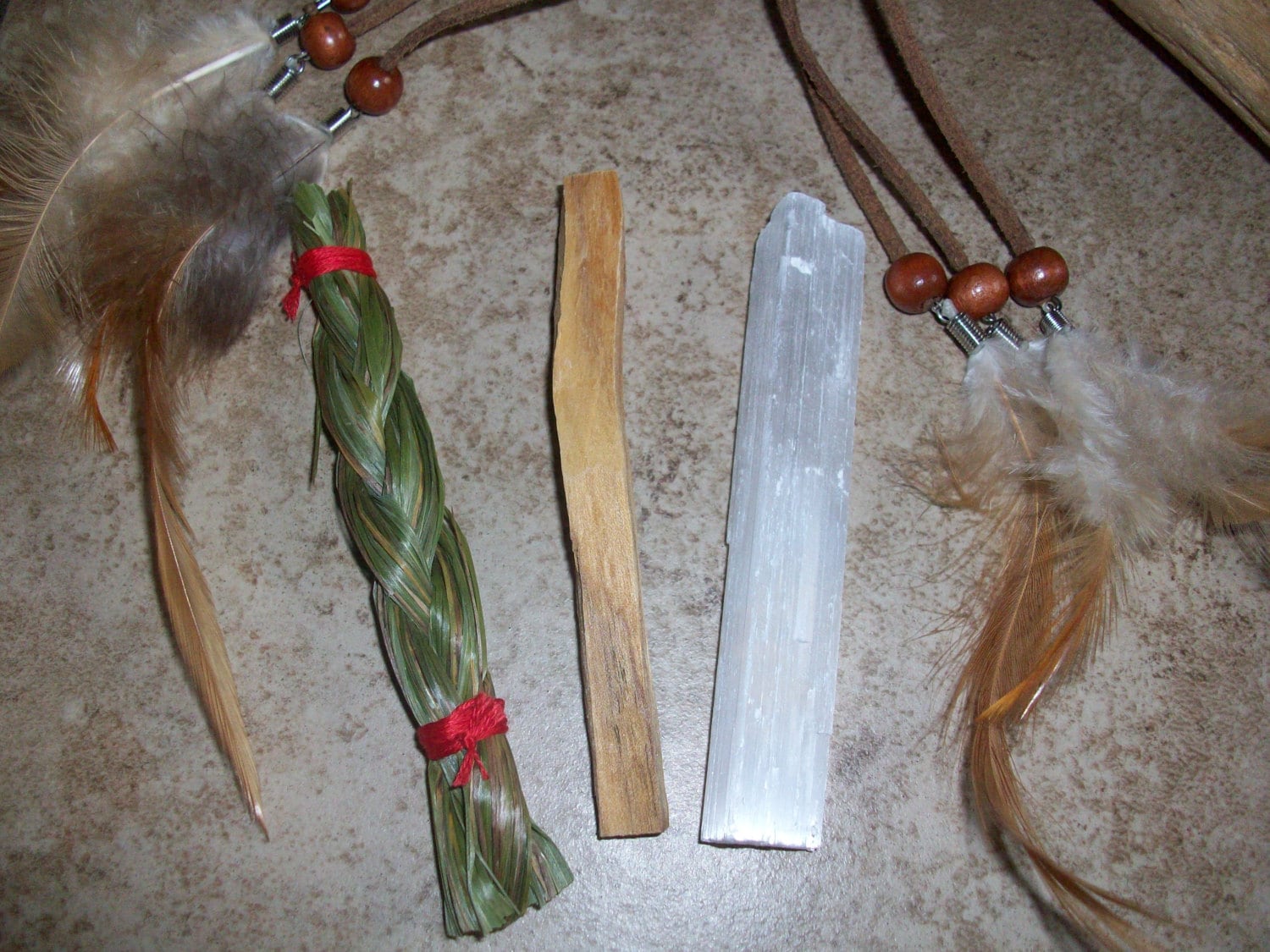 Our Sweet Release Smudge Sets include one Mini Sweetgrass Braid, one piece of Palo Santo Wood and one Medium Size Selenite Blade.

~Sweetgrass has many ceremonial uses among most Indian tribes and if often used in conjunction with sage. Its smoke is used for prayer, cleansing and as a healing agent. White Sage is first burned to drive away any negative forces, then Sweetgrass is burned to summon positive ones. It is frequently used in Sweat Lodge ceremonies.

Sweetgrass holds an energy of blessing rather than cleansing and should be used to bring in positive energy after negativity has been released, rather than on its own. It is used as a smudging tool to purify peoples auras, cleanse objects, and clear ceremonial areas or healing spaces. Sweetgrass can also be carried or worn as a protective amulet.

Sweet grass is the sacred hair of Mother Earth; its sweet aroma reminds people of the gentleness, love and kindness she has for the people; this is why Native people pick it and braid it in 3 strands representing love, kindness and honesty. Sweetgrass is used for smudging and purification of the spirit. When Sweetgrass is used in a healing or talking circles it has a calming effect and is said to attract good spirits.

~Palo Santo is a mystical tree that grows on the coast of South America and is related to Frankincense, Myrrh and Copal. In Spanish, the name literally means “Holy Wood”. It is part of the citrus family and has sweet notes of pine, mint and lemon.

Palo Santo is enjoyed by many for its energetically cleansing and healing properties similar to Sage and Cedar. It is a strong medicine that has been popularized for its heavenly presence in Ayahuasca ceremonies while keeping energies grounded and clear. It creates a pleasant, fresh smoke that works well in keeping away mosquitoes and other flying insects which is one of the prime uses for the people who live in Ecuador and Peru. It provides an uplifting scent that raises your vibration in preparation for meditation and allows for a deeper connection to the Source of all creation. It is also said that Palo Santo enhances creativity and brings good fortune to those who are open to its magick.

~Selenite crystals work to help you to bring light down from the higher realms into the physical body, to create personal transformation. The white or transparent crystals have a strong vibration that may open the crown chakra and the soul star chakra.

This will assist you to contact the Divine Mind and to access the Angelic realm. These are high vibration crystals, that also deliver clarity of mind, by cleansing the aura of negative energy build-up, both within the physical and the etheric body.

Selenite crystals are high vibration stones that will move your spiritual growth forward quickly. They are a stone of the third eye chakra and the crown chakra. Using Selenite can be powerful for activating dormant abilities from past lives. It has the capacity to take you to the Higher realms, which often happens quickly.

I just love everything I have gotten soooooooooo much! I'm on my 4th order and have sent these insence to 4 different people. I honestly think this is my favorite insence now.